Working for a company that deals with branding and company logos all the time, we always like to council other companies on the importance of logos and what they mean for your brand. One of the most important aspects of a logo is the colours that are used in the logo design. Feelings are brought out by colour and it can even convey a message or a theme. Here is a comprehensive list of different colours and what they mean for logos. Armed with this knowledge, you can be sure you are delivering the right message to your target audience. 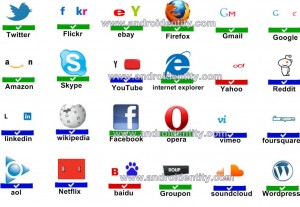 Black can have very different meanings, depending on the context. Black is often thought of as evil, scary, or associated with death. However, in logos for businesses, it can mean drama, sophistication, serious, bold, and powerful. Black in a logo can make products look expensive, elegant, or heavy.  Companies that represent these strong qualities with black in their logo include: World Wildlife Fund, EA Sports, Tivo, Veritas, and Macquarie Bank.

White can bring feelings of cleanliness, or good, as is often portrayed in Hollywood. In logos, white can represent purity or simplicity. Black and white is often used together in logos. Even though they are opposites, they work well together to show the contrast of power and credibility to peace and prosperity. Black and white together in a logo can show balance. White, whitespace, or black and white combined is used successfully in the logos of these companies: Qantas, Subway, Adobe, World Wildlife Fund, and Apple.

Red can invoke very different meanings and is a very strong colour, so use caution with reds in your logo. Red can represent very strong emotions such as love, passion, sportiness, or aggression. It is said to physically affect people looking at it by activating the pituitary gland, increasing the heart rate, and making people’s breath quicken. In many designs or imagery, red can mean blood, danger, or indebtedness, and it is a universal colour for “stop”. So, companies should be careful and test their logo designs with their target audience before releasing it to ensure that the colour is used in an effective way in your logo and accurately represents the feelings you want for your company. Some famous companies with red in their logo are CNN, National Australia Bank, Coca-Cola, Telstra, and BBC.

Yellow is the brightest colour to the human eye, but in logos is very hard to see on a white background, so that should be avoided. Yellow also can have two very opposite meanings. The first and probably most popular group of meanings is sunshine (used in almost all cultures to represent the sun), cheer, happiness, fun and energy. The second, more negative meanings can interpret yellow as cowardly or caution, as in traffic lights. Because of the dual meanings, it is important to be careful how yellow is used in your company logo so that you can make sure that it conveys the hopeful,  happy, and warm feelings you want it to. Companies that successfully use these positive sentiments in their logos are McDonald’s, Commonwealth Bank, Subway, and Best Buy.

Blue is actually the most popular colour for company logos because it is used to mean quite a variety of different sentiments. The colour of both the sky and the sea are shades of blue and often used in boating, aquatic, and airline company’s logos. Blue brings a cool and calming effect over those who look at it, so it can be used to represent those ideas as well as wisdom, trustworthiness, strength, loyalty, and stability. Many social media companies use blue in their logos: Twitter, Facebook, LinkedIn and Skype all have blue logos. In addition to those companies, other businesses that use blue logos are: IBM, BHP Billiton Bank, and ANZ Banking,

Orange is the combination of red and yellow; as such it also represents a combination of the same ideas those two colours do. Warm, bright and youthful, orange logos can represent the tropics, sun, fire, or fun. Similarly to how red increases heart rate, orange increases oxygen and is said to activate brain activity. Therefore children’s companies, health companies, and travel companies with tropical destinations will have success using orange company logos. Companies famous for using orange are Nickelodeon, Blogger, and Burger King.

Green is another logo colour that has many meanings, some positive and some negative sentiments. Green can be nature, Earth, growth, healing, or money. It is said to be relaxing; however, it can also represent envy or greed.  When green is used correctly in logos it will mean that the company will be associated with wealth, calm, healing, freshness, or the environment. Companies that achieve positive sentiment with green logos are Starbucks, Woolworths, Sprite, and the Cooking Channel.

Brown invokes feelings like reliability, durability, stability, wholesomeness and earth’s naturalness. Just be careful that it does not elicit a negative response, as in dirty or dirt. Certain shades of brown can mean different things; beige can mean neutral, where terracotta can mean a more unique and upscale look. Companies with successful brown logos are Rio Tinto, UPS, Cotton, and Ghirardelli.

Purple is a blend of tranquil and stable blue and fiery red energy, but the resulting feelings is not so much a blend of the two in the case of purple. Instead, purple is representative of fantasy, magic, mystery, royalty, and wisdom. Lavender, when used in logos can invoke feelings of nostalgia and sentimentality about a company. Prosperous companies with purple logos include: Yahoo, Cadbury, Avid, Hallmark, and FedEx.

Pink is one of the few colours that meaning really varies with the intensity of the pink colour between pastel pink and hot pink. For businesses, pink can be used to send a message of playfulness or tenderness, and of course, represents products for girls or women. Hot pinks can mean energy, excitement and fun while lighter pinks can be romantic and sentimental. Companies that successfully portray this imagery in their logos are Barbie, T-Mobile, Glam Media, Victoria’s Secret, and Baskin Robbin Ice Cream.

We should mention that some of the most successful companies and some of the most popular logos are rainbow or multicolour and that is an indication of being “everything to everyone”. Companies with multi-coloured logos include: Google, MSN, Ebay, and NBC.