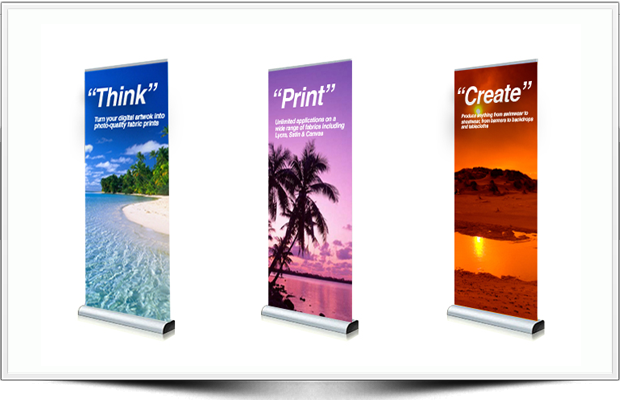 Banners tend to come in two different varieties: PVC and mesh. PVC banners are made of plastic that is very versatile. You are probably familiar with PVC from its use in plumbing pipes. It is also used in clothing to recreate a faux-leather look. It is actually the third most common type of polymer used around the world because it is very versatile and very affordable. In fact, it is so affordable that certain models of PVC can be used for musical instruments or even hot water heaters that would melt normal plastics.

The other type of banner is a mesh banner. These are made of a material covered in tiny holes. Essentially, they are like nets but the holes are so small that you cannot see them. The main benefit of mesh banners is that they allow air to flow through, so the banner is not distorted by the wind.

No matter the banner material, it is usually printed in one of three ways. The three ways are glued, painted, or printed.

This process of lettering vinyl banners consists of gluing vinyl letters to a blank banner. This is fairly versatile as long as the source of the letters has a wide variety. However, if the banner maker does not print its own letters, it might not be able to print your logo and glue it to the banner.

However, the biggest problem with gluing the letters or images to your banner is that this is very unreliable. The method does not stand up to the elements very well. Heat and UV rays from the sun tend to degrade the quality of the glue, causing it to become less adhesive and the letters to fall off. Also, the wind pulls and tears at the edges of the letters until they start to detach from the banner. Lastly, the rain can degrade the glue as well. So, this method might be fine for simple banners that are used indoors, but it is not a viable solution for vinyl banners that are outside.

This is a more classic method of lettering a banner. This method involves just painting the banner by hand. This method has a few drawbacks. The main drawback is that you will need to find someone with a steady hand and artistic talent to draw the banner. If you are not careful, then you will end up with an unattractive banner. Also, the type of paint is very important. It has to be resistant to the elements. The UV rays of the sun tend to fade the paint. Also, the rain can eventually degrade the paint and make it fade.

This the most reliable and preferred method of imaging on a banner. With this method, one simply prints directly onto the banner itself. This is the preferred method because it can use the best new inks that resist the damages of weathering. Also, the computers that print can print your logo from your website so you know that it is exactly as you want it.