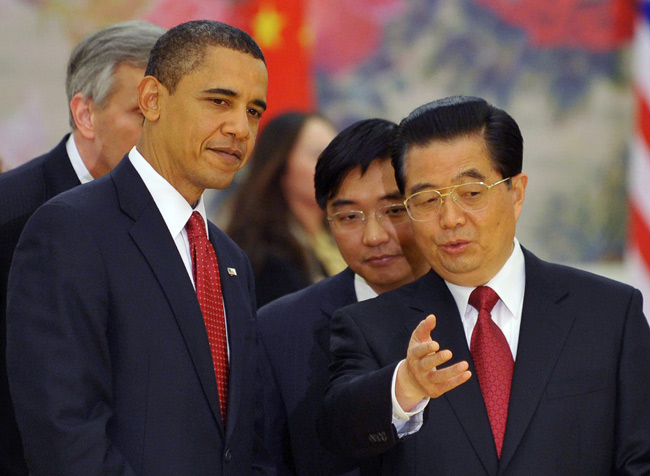 WASHINGTON – President Barack Obama and his Chinese counterpart Hu Jintao confront stubborn rifts over North Korea and bilateral economic imbalances on Wednesday when they meet amid the pomp of a formal state visit.

Both presidents have vowed stronger cooperation between the world’s two largest economies in an effort to bridge the strains of the past year over human rights, Taiwan, Tibet and the gaping U.S. trade deficit with China.

Taking major strides toward narrowing these disagreements, however, will test the depth of their partnership.

Some in Washington and Beijing are treating the summit as a test of how well the two powers can work in concert as China’s ambitions expand in line with its rapid economic growth.

“So this is a critical juncture to determine how good the cooperative relationship between our two countries can be going forward.”

Hu has been reluctant to give ground to U.S. demands to intensify pressure on China’s ally, North Korea, to abandon its nuclear ambitions, after the North alarmed the region by shelling a South Korean island and claiming advances in uranium enrichment, which could give it a second means to make nuclear weapons.

Beijing has also bristled at U.S. demands for faster appreciation of the yuan currency, which would make Chinese goods relatively more expensive and possibly help lower China’s trade surplus with the United States, which Washington puts at $270 billion.

U.S. lawmakers are impatient for results and a meagre outcome could increase congressional pressure on China over the trade deficit and to punish China for managing its currency.

“It is critical that Congress, and the rest of the world, sees results during the summit between Chinese President Hu Jintao and President Obama, particularly regarding North Korea and economic issues,” Rick Larsen, co-chair of the House of Representative’s bipartisan U.S.-China Working Group, said in an e-mailed statement.

A survey by the American Chamber of Commerce in Shanghai, published hours ahead of the summit in Washington, showed a growing number of U.S. companies say the enforcement of intellectual property rights has deteriorated in the last year and that the regulatory environment is the biggest hurdle to doing business there.

Though more U.S. companies in China expect higher revenue in 2011, nearly two-thirds of the respondents said the regulatory environment had either remained stable or deteriorated over the past year.

“IPR (intellectual property rights) remains a top concern because U.S. companies perceive a lack of IPR protection and enforcement to be a blow to their competitive advantage and is costing U.S. companies billions of dollars in lost revenue each year,” the survey said.

Hu is likely to raise his own worries about U.S. economic and security policy, including arms sales to Taiwan, the self-ruled island that China deems an illegitimate breakaway province.

The arms sales to Taiwan, even at the time when cross-Strait relations are improving, is the single most important factor jeopardizing Sino-U.S. military ties, Major-General Yao Yunzhu, a senior military researcher, wrote in the official China Daily on Wednesday.

Beijing also wants the Obama administration to reassure it that China’s big holdings of U.S. treasury assets are not threatened because of what some critics might describe as loose U.S. fiscal policies.

The talks between Obama and Hu will come swaddled in ceremony, including a 21-gun salute and a grand dinner. They are unlikely to trade sharp public jabs that could upset the carefully choreographed stagecraft.

The images from the White House will be a valuable diplomatic laurel for Hu as he enters into his final stretch as China’s leader before leaving office in late 2012.

Wang Lili, a research fellow at Beijing’s Renmin University, said both needed to work much harder at their relationship.

“The sad fact is, there is still a lack of strategic mutual trust between the two nations, as their military ties lag far behind their economic and political relations, and each portrays the other with a certain degree of distortion,” Wang wrote in the China Daily.

China has sought to soothe U.S. ire about job losses and the trade deficit by sprinkling business deals that could be worth over $8.5 billion in the run-up to Hu’s visit.

Raising hopes for more possible deals to come, several U.S. and Chinese business leaders are to meet on Wednesday at the White House. Obama and Hu are scheduled to drop by that meeting.

Hu arrived on Tuesday and will also visit Chicago before returning to China on Friday.