Skip to content
Home › News › Nexus 6 Or Galaxy Note 4 – Which One Is More Powerful? 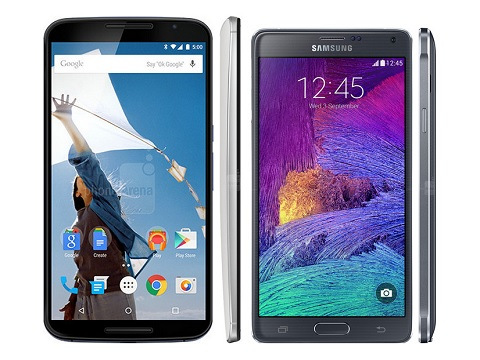 The phablets are now quite popular. Among the considerable number of these devices focus attract Google Nexus 6 and Samsung Galaxy Note 4. And it’s time to compare these devices at least in order to understand which one is the leader among the best of its kind.

The most famous family phablet series is Galaxy Note 4. It is the second year for the Google Nexus series to enter in such class. Displays of both the phones are nice. But smaller and more compact Note 4 wins this race.

In design Google nexus 6 looks like Moto X and it is made of soft plastic. However the quality is pretty decent. And on another hand, Note 4 carries pretty good designed and good quality back cover.

And on the dimensions point of view, Galaxy Note 4 is ahead because of lesser weight and thinner profile.

Both the phablets Samsung Galaxy Note 4 and Google Nexus 6 runs the same processor from Qualcomm. Here we are talking about Snapdragon 805. Plus the Ram amount is also same i.e. 3GB. So, in this area there would be a tie between both phones.

In storage it is clear that Galaxy Note 4 is verdict because it carries the micro SD card slot that allows it to expand its memory up to 128GB. And on other hand, Nexus 6 lacks this functionality.

Nexus 6 comes with the 13-megapixel main Camera with dual LED flash. And the front camera of Nexus 6 is rated at 2MP. On another hand, Note 4 has the 13MP camera as main camera and the secondary camera sensor or the front sensor is rated at 3.7MP.

It is really difficult to choose one out of Note 4 and Nexus 6, but Note 4 is more compact offer more features, so it is our choice. But on another hand, Nexus 6 is also nice; you can choose if you are actually looking for a bigger display size than Note 4. Moreover, the next Galaxy Note 5 would be more interesting as the rumors are spreading like fire.