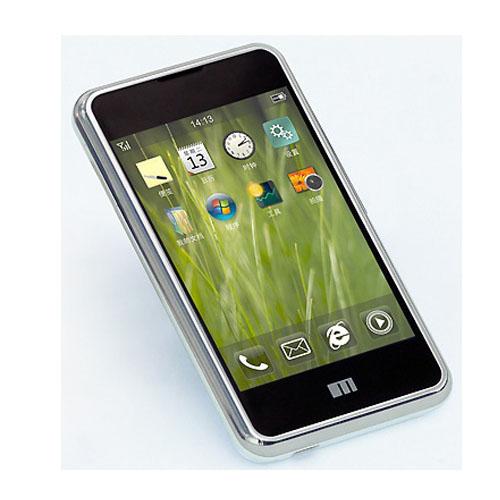 The device about which will speak today is called Meizu M8. This device is made in China by the company Meizu.

Meizu M8 to external signs reminds iPhone. We will tell even more. The given device is copied by the Chinese designers from iPhone. The external shape of the given device pleases an eye of the user. The central button at M8 is oval, instead of round, the socket for a charger is adapted for mini USB socket, dynamics are located in above part of the device, instead of in a bottom, as in the majority of modern devices of such class. The given arrangement of loud speakers I consider very successful. If dynamics are located in the bottom part of the device the user during the conversation usually closes their hand. In iPhone dynamics are quite often casually closed by a hand. For convenience and fast replacement of the accumulator, developers have made a back cover demountable. On the right party of the device designers have placed the button of inclusion of a player. It very much will be pleasant that user which like to listen to music on the journey and not to take out a hand from a pocket. (It is a question of a winter season).

The top cover at M8 is similar to a structure of a cover at iPhone and practically from outer side doesn’t differ. It also is made of black plastic which is covered by glass. Not up to the end designed the accessory which settles down on a lateral wall of the device – a molding. If at iPhone the molding is made of a metal plate at the given device the molding is made of plastic. During long usage the paint from a molding is very often showered and this usually spoils the appearance of the device.

Back cover M8 is made of black glossy plastic same as well as at iPhone. Difference is that at iPhone edges of a back cover flat and at M8 edges rounded off. With the software Chinese’s have prepared a surprise for the clients. In the device specially developed software which reminds Linux in questions of work with the interface a little is established. And in the rest for the device the unique software is put. It reminds Windows CE 6.0 a little! If to tell more precisely on Windows CE 6.0 the platform is based.

To switch on the phone it is necessary to press the big button which is located in the bottom of a desktop. The given button isn’t strongly allocated and in the beginning the impression that it not the button, and an information arrow is made. In the rest the given device simply surprises with the perfection. The screen with the good permission allows looking through video in very high quality. As a whole the given device it is possible to use and receive from it huge pleasure. If there will be a possibility to install on its applications adapted for work with Windows Mobile in that case competitors at given device won’t be.

I am Susan Hannan from Exams Key; it gives 100% 9L0-407 exam exams. Let’s take benefit of 1D0-635 exam Exams material efficiently and get guaranteed success. Check out free demo of all certifications Exam.