Skip to content
Home › Business › I Confer: The Next Wave of Conferencing Technology

Throughout our history, humans have explored new and different ways to communicate with each other. Drums and smoke signals worked well for centuries. Letters through the post office served a purpose. The invention of the copper wire caused an explosion of technological options. Now we have high-speed fiber, HD video and wireless connections. The age of video conferencing is upon us.

For nearly 30 years, companies have toyed with conference call technology and video. The successful companies dedicated conference rooms with expensive cameras and projectors. There were often technical problems, video and audio was often out of sync, and international videoconferencing worked by luck more than anything else.

Now, the consumer carries a videoconferencing device with them — their smartphone or tablet — and can be connected to someone else almost instantly. The biggest problem facing companies was network speed and bandwidth. High-speed Internet connections are now available at the corner coffee shop.

With the growth of social media, the desire at the consumer level to have videoconferencing available has soared. According to research by Frost & Sullivan, this desire has gone from “I’d like to have that” to “I must have that.” People see teleconferencing as a natural way to communicate with others and are now seeing videoconferencing in the same light. This paves the way for business to adopt video as a standard way of connecting with their customers and vendors.

With the proliferation of mobile devices in use by the consumer, businesses have a ready-made way to stay connected with their customers. Mobile videoconferencing on a large scale is expected to be the next wave of technology. High-definition screens, high-speed processors and high-speed network connections are set to make video the next natural communication tool.

Companies such as OnConference have set the groundwork for web conferencing by providing low-cost, global teleconferencing services. A person can be on their cell phone in their home office in Buffalo, New York, and have a conference call with a customer in Auckland, New Zealand, a distributor in Quezon City, Philippines, and a tech support person in Bangalore, India.

Skype has been around for some time as a low-cost option for videoconferencing. With its recent acquisition by Microsoft, it could create the next big shift in videoconferencing capabilities. Google has its product called Hangouts that is becoming a popular video-social-networking tool.

This is how important technology starts. Building on other technology that has proven to be solid, we try new features and integrate with other useful tools. Eventually we have a product that will become a “household word,” something we rely on without thinking about it. Remember when IM (Internet messaging) was a new and exciting technology? Now it’s available on every platform and works seamlessly. We just assume it will be there and work.

The current state of video technology is on the cusp of becoming the next big communication advancement. Research into ultra-high-speed networks, intelligent network routing and switching remove the speed and bandwidth barriers from before. Small crystal clear displays on tablets with mobile capability make videoconferencing available anywhere. For special occasions, large flat screen displays that are nearly transparent when not being used open up even more possibilities in an auditorium setting.

We are at the beginning of this new wave of technology. As it evolves, we will likely be surprised by what we can do with it. Surround sound audio and 3D images will make us feel as if we’ve stepped into the science fiction future that we only dreamed of a few years ago. Until then, though, we can utilize what companies like OnConference and Skype are producing to reach out across the distance. 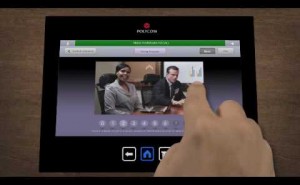