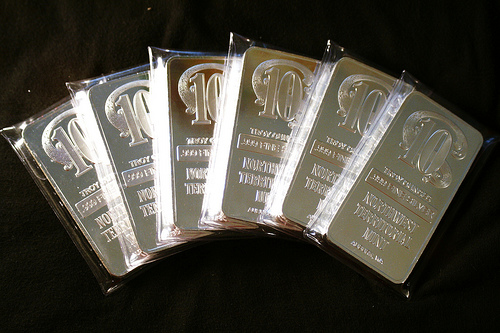 If you have money to invest, selecting the right asset which balances your attitude to risk along with potential gains can be a tricky path to navigate.

During a booming economy, the decision is far easier with more options available and the risk – at least in the short term – far less.

However, in a fragile economy, not just nationally but worldwide, the choices to invest are either far more risky, or if not, offer very little in return. In some cases, the returns are so tiny they would be wiped out by the cost of living, leaving an actual shrinkage in real terms.

Investing in physical bullion has always been a popular form of investment and despite the myriad of options which are now available in the modern world, this traditional type of asset remains as much in demand as it ever was.

We take a look at eight of the reasons why you should buy silver and gold bullion.

1) A More Stable Form of Investment

There are a huge number of different types of asset to invest in but when the economy is in a downturn finding one which is prosperous can be difficult.

Perversely, silver and gold tend to perform particularly well when all else is wobbling around them because they are viewed as a safe haven and a place where money can be sheltered without undue risk.

Despite being linked to the movement in the Forex market, gold and silver are not an actual currency used and indeed the US dollar is the reserve currency in the world. This provides them with relative autonomy and their value tends to rise when all others are falling, a handy feature indeed.

You never know what’s around the corner so whilst you may plan on hanging on to your bullion for many years to come, you may be struck by a financial disaster that means you need to raise money fast.

Holding physical bullion makes it easy to sell when you need to, compared to trying to dispose of assets such as stocks and shares. The market for gold and silver has almost endless liquidity so you will never have a problem shifting your investment either.

3) More Than Just the Intrinsic Value

Certain types of bullion, such as those held in coin form, have the potential to be worth far more than simply the weight of the precious metal, visit sites like Coin Invest Direct for a selection of coins.

Bullion is typically valued according to its weight, but there are some types such as coins which have a value which far outstrips this. Coin bullion is very collectible and as such, the value of the asset is increased. If the coins held are rare, unusual or particularly old, their worth will rocket, particularly if few others can be found on the market.

4) A Valuable Currency and More Besides

Silver and gold bullion always have, and probably always will be, much sought after as a form of safe investment. However, whilst this is the arena they are most associated with, they have further uses beyond monetary currency.

Both silver and gold have a number of qualities – both very different – which make them valuable and often used in other applications such as electronics and medicine. Silver has an almost unrivalled thermal and electrical conductivity whilst gold radioactive compounds can be used for both diagnosis and treatment.

Both metals have limitless uses and with advances in technology and medicine continuing all the time, their value and demand can only rise.

The uses outside the financial sector, and even disregarding jewellery-making, are not only likely to surge as technologies advance but as demand increases from a greater number of nations.

Emerging countries, or those who have traditionally not had such a high demand such as India and Brazil, are starting to catch up and producing higher and higher numbers of products which require the use of silver and gold.

Prices respond to demand, and as the metals become more sought after, the potential for an increase in value rises in tandem.

Silver in particular is mined in some of the most volatile countries around the world, where the political climate is far from certain and the infrastructure cannot be guaranteed. In 2010, the two top silver producing countries were Mexico and Peru, neither of which could be described as stable.

In the list of top 20 producers, there were a number of other nations such as Bolivia, Russia, Iran, Kazakhstan and even South Africa which all have questionable regimes or are prone to strikes, blocks in production or other problems.

In the face of a rise in demand for the metal, these potentially fragile environments mean that supply could be found lacking at any given time. Holding the physical bullion yourself, rather than just investing in a company that mines for example, gives you the upper hand in the market.

We live in times where conflict is an ever-present in everyday lives, even if it isn’t going on in the countries in which we live.

The news brings us stories of civil war, uprising and conflict in nations all around the world. Recent times have seen Egypt, Syria and some Gulf nations locked in a battle for power.

This political unrest has an impact on the entire currency market, because its implications are far-reaching and go way beyond what’s immediately obvious. And although on a short term basis the price of bullion may fluctuate – like any kind of asset – over a long period there is always the potential for a sharp spike in its worth in response to events from around the globe.

8) Precious Metals are an Insurance

By holding bullion you are effectively master of your own wealth and even if the currency of your country should fall into crisis, you still hold a valuable asset.

The world is currently in a unique position although the vast majority of people don’t realise it. Since 1971, every country has a fiat currency, not one which is linked to a real value in any way. A fiat currency is one which is based on faith and belief, not actual wealth. In other words, the government tells you how much the piece of paper you are holding is valued at, it’s not a tangible asset.

In the past every single fiat currency has ultimately failed, a worrying statistic bearing in mind this is what the whole globe now trades in… There is no reason to think that the current system of fiat currencies will collapse, indeed it relies on belief and this is now firmly entrenched worldwide. However, holding an asset of actual worth, rather than paper money which runs the risk of being devalued in a crisis could just be your saviour if things don’t pan out in the economy.

Both gold and silver have long been held in high esteem as a valuable way to hold your wealth. Modern life hasn’t changed this one iota and providing you have a secure location to store your bullion, this is one of the safest ways to invest and protect your financial future.